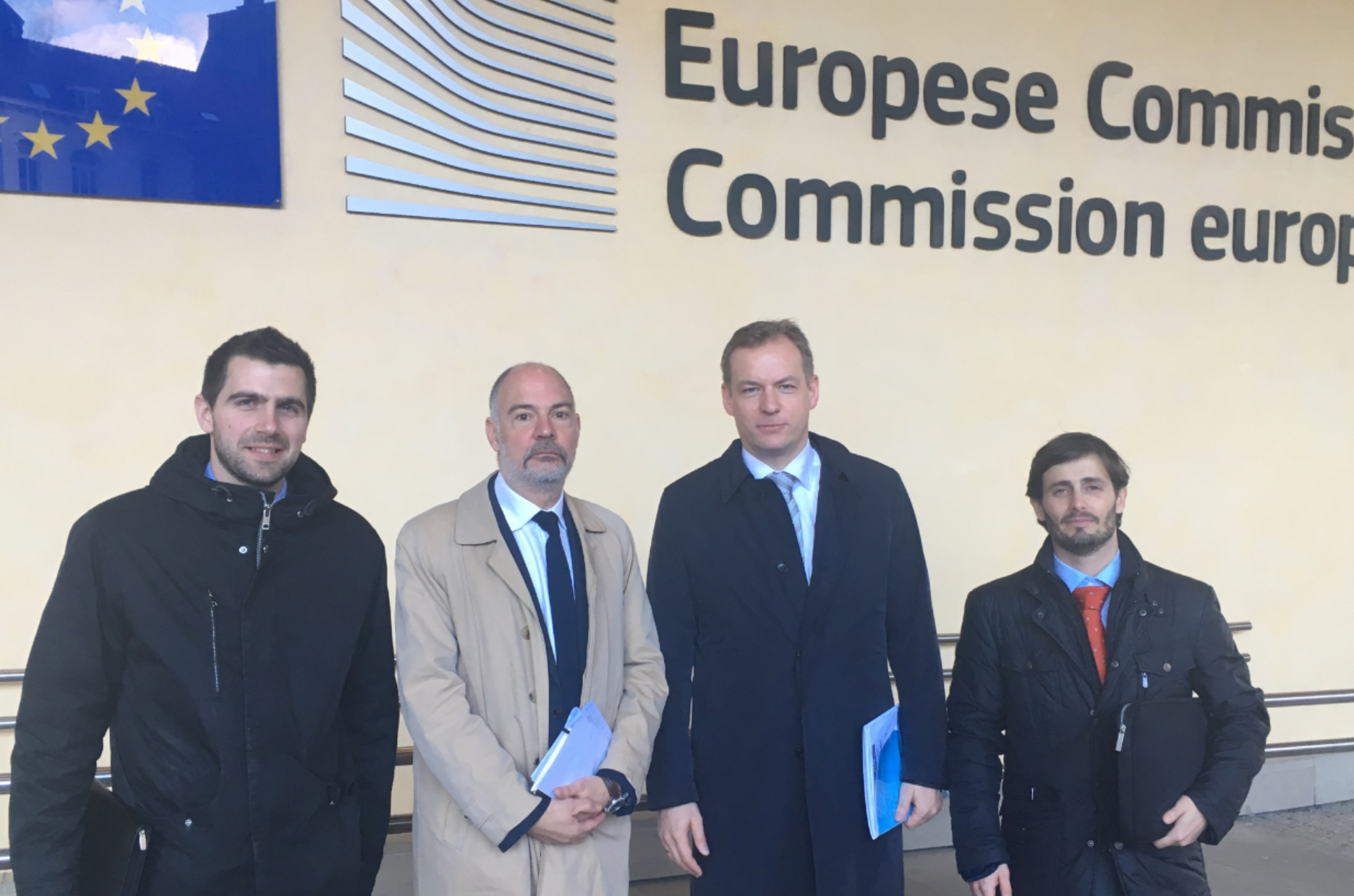 Trade Association representatives from both sides of the Channel met with Michael Barnier’s taskforce to explain why it’s in everyone’s interest to keep the trade of wine and spirits flowing after Brexit.

Last year, the four organisations teamed up to nail down key issues long before the Article 50 deadline expires and calling on politicians on both sides to do the same. The result was a ground-breaking Brexit position paper agreed by all parties, in October, on how best to move forward with trade when Britain leaves the EU.

Representatives of the four trade associations gathered at the Commission’s iconic Berlaymont building at the heart of the Brussels EU district to drive home the messages in the joint paper. In particular they focused on the importance of reaching a negotiated settlement – with a sensible implementation period and ground breaking new free trade deal.

“The Brexit position paper makes clear that partners in the wine and spirit trade right across Europe strongly support the UK and EU securing a comprehensive trade agreement. All of us want a solution that enables us to continue to do business after Brexit and to ensure UK and EU consumers will be able to continue to enjoy the full range of products.”

“The next step is to bring the politicians onboard and that is what the meeting with the Brexit taskforce aimed to achieve. Time is running out and the economic importance to businesses on both sides of the channel to get this right cannot be over emphasised”. “This is particularly true in the case of Ireland”, he added. “We need clarity on this complex matter during the Phase 2 negotiations. The Irish whisky and spirits industry operates on an All-Island basis with seamless cross-border supply chains. It is vitally important that these are protected from any divergence of rules or the imposition of disruptive, new excise or tax requirements”.

“We welcome this week’s agreement to define the terms of transition to bridge the period from March 2019 until our new trading relationship is agreed.  It is vital for business continuity that there is only one change of rules at the end of the process”

“We have also reiterated our position regarding FTAs with 3rd countries. Around 10% of global Scotch Whisky exports are covered by existing EU FTAs, valued at over £400m a year.

“If transition is to be truly ‘status quo’, it must encompass the entire body of EU law, including the integrity of EU trade policy and international legal obligations which includes the continuation of its FTAs and bilateral spirits agreements.”

“The WSTA has, from the outset, been calling for a transition period. Frankly we need politicians to deliver continuity for our industry, and not to indulge in politicking that risks delay or damage to our industry and its businesses – on whichever side of the Channel they reside.”

According to a document titled EU Exit Analysis, leaked this week, growth is expected to be lower in each of the three different outcomes than if the UK had stayed in the EU.

“The content of the leaked document, which suggest that every part of the UK economy would suffer, reinforces the urgent need for trade associations to secure future trade – and provide business with certainty as soon as possible.”

The wine and spirits industry has come together to urge the EU and UK to reach a negotiated settlement that preserves trade flows and avoid border tariffs and related administration costs.

The group made clear that it is the united position of wine and spirit producers across Europe that no deal is an unacceptable outcome from negotiations.

Wine and spirits traded between the EU and UK are not currently subject to tariffs, and unless the UK remains in the Customs Union, or a Free Trade Agreement is negotiated between EU and UK, this tariff-free environment would change post-Brexit. 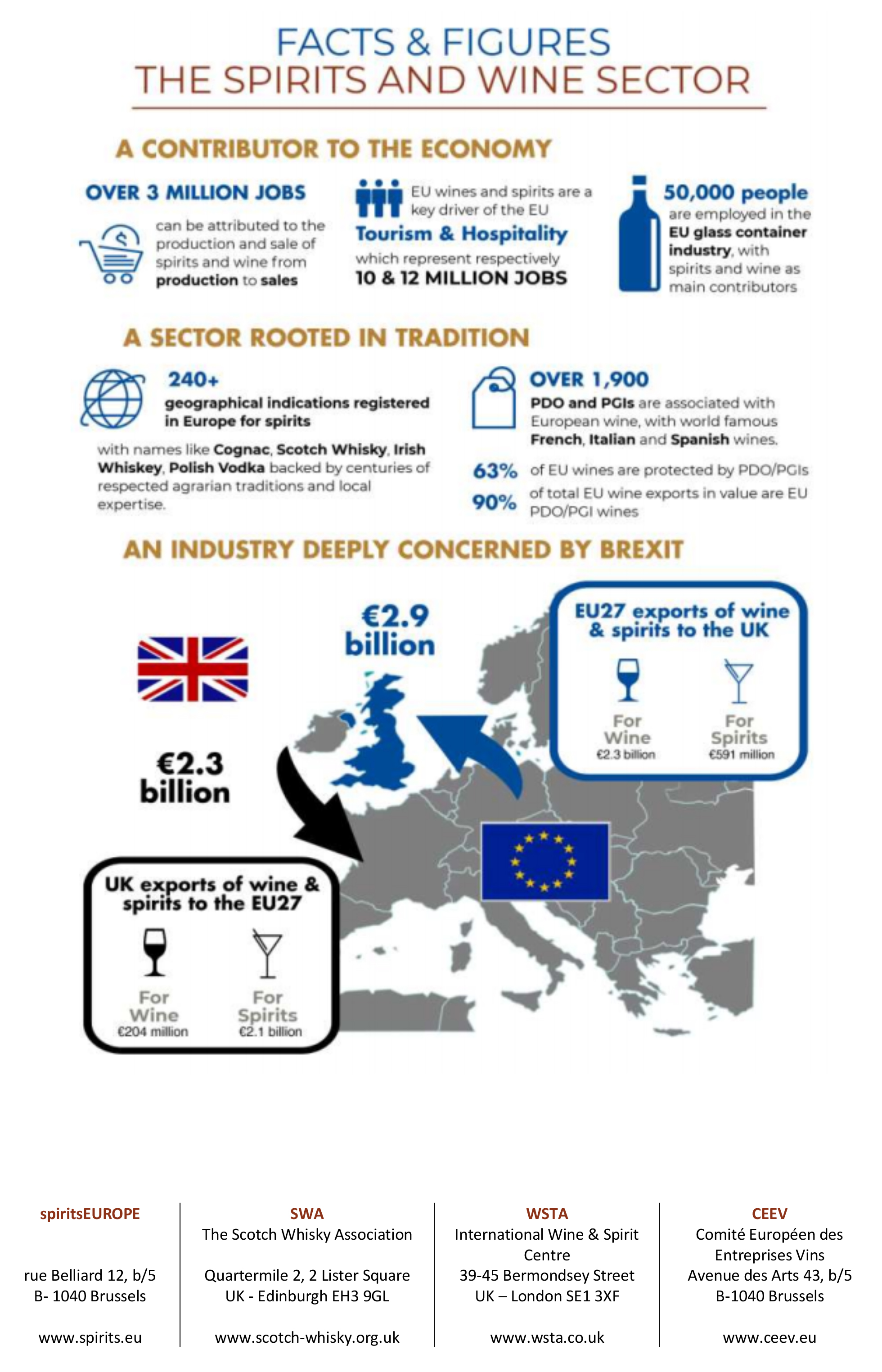 01.02.2018 European Wine & Spirit Trade unite to go head to head with Barnier's Brexit Taskforce
BACK TO THE LIST OF PRESS RELEASES
STAY CONNECTED: Keep up-to-date with spiritsEUROPE’s activities via our Twitter & Newsletter