The Polish Government is planning to adopt a new law that would impose additional taxes on small alcohol beverages containers below 300ml. This measure would, once again, disproportionally burden spirits (with more than 85% of these containers used for spirit drinks) which are already taxed at disproportionately high levels: €1,433 per hectoliters of pure alcohol when compared to beer (€489) and wine (€361). As a de facto punitive tax on spirits, the measure would once again unduly favour the beer sector in this market which already enjoys a privileged position not only with regards to taxation, yet also with regards to advertising rules (beer can be advertised freely while public advertising of spirits is banned).

In addition, the measure seems doubtful, or even counterproductive, from a health policy point of view. Per capita consumption in Poland is around 9.9 litres of pure alcohol per year, with 5.9 litres coming from beer, 3.6 litres from spirits and 0.8 litres from wine. While the general evidence on how taxation affects overall consumption is mixed (and often shows not effect with regards to a desired reduction of harmful consumption including binge and underage drinking) the natural priority focus for action should be on the most widely-consumed product which in Poland is beer rather than spirits. 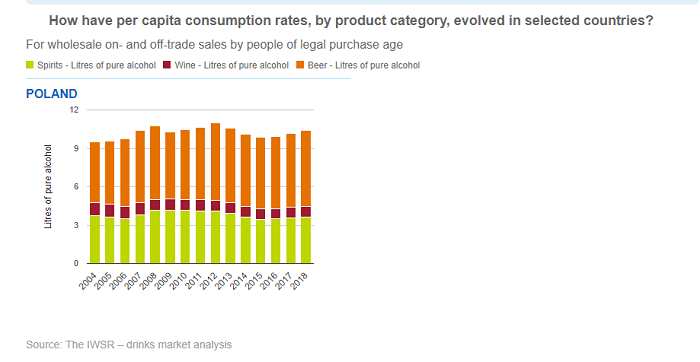 In Poland, 811,000 spirit bottles of 100ml are sold daily which means 0.081 million litres of final product compared with 8.7 million litres of beer. If we treat these numbers as a one-time sale, every day 3% of Poles of working age buy one bottle of 100 ml of spirit (3 standard units) while 33% of them buy 1l of beer (4 units or even more because 25% of these beer cans/bottles have a high alcohol content, some even above spirits!). In light of these figures, the measure should be amended and re-balanced in the spirit of fairness and proportionality!