A Spirit of Growth

With an increasing awareness of health and wellbeing, people have become adapted to the importance of drinking in moderation. As a result, alcohol consumption in the EU as a whole is falling. For spirits, the volume sold in the EU has fallen from a peak of over 26,000 hectolitres (around 3.7 million bottles) in 2008 to below 25,000 hectolitres in 2019 - a drop of more than 5%. Over the same period, the value rose by 29%. 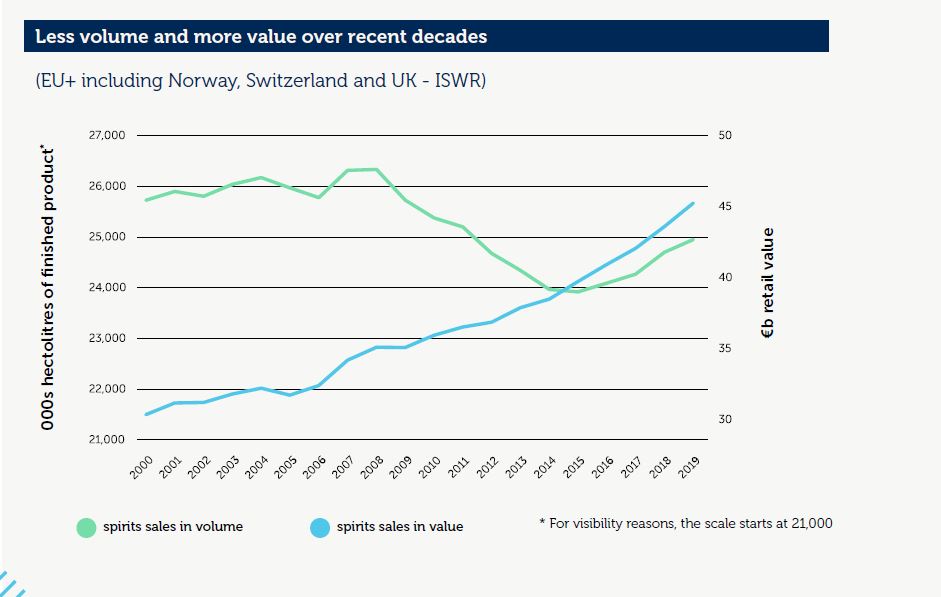 The shift to "premiumisation" incentivises producers to keep innovating

Importantly, however, there is a distinct trend in this drop in volume. The so-called lower-priced ‘value segment’ has fallen by 18 percent, more than double the overall volume drop for spirits for the last ten years. At the same time, however, the value of spirits sales overall has continued to rise steadily since 2000. This phenomenon is the result of consumers preferring to ‘trade up’ in quality.

Increasingly, there is a growing interest in exploring the distiller’s art, such as wood-aged vintage brandies and whiskies, often with unique finishes. Such products can be expensive - they are frequently hand-crafted and stored undisturbed for long periods (tying up the manufacturers’ capital in so doing), however, but their popularity continues to grow. This can be seen as a positive development - people favouring premium products are less likely to adopt risky drinking behaviours and encounter the associated health issues.

This shift to ‘premiumisation’ also brings an additional benefit; it provides incentives and encouragement for producers to continue to innovate; showcasing their work among the best of Europe’s produce. Indeed, a great deal of these premium spirits are sold in airport stores, providing a global platform for their artisan capabilities to an international audience.

A Spirit of Growth