All spirits go through at least two procedures - fermentation and distillation.  Fermentation is where all alcohol is created, distillation is where the alcohol is separated and removed.  In order for fermentation to occur, two things are needed:  a raw material in liquid form that contains sugar, followed by the addition of yeast.  Yeast is a living organism that feeds on sugar; the bi-product of this consumption is alcohol and carbon dioxide (CO2).

A simple formula for fermentation is:

Distilling is essentially the process whereby a liquid made of two or more parts is separated into smaller parts of desired purity by the addition and subtraction of heat from the mixture.  The vapours/liquids distilled will separated other ingredients that have lower boiling points.  Distilled spirits are produced from agricultural raw materials such as grapes, other fruit, sugar-cane, molasses, potatoes, cereals, etc.

Example: production of a spirit made from cereals such as whiskey:

Other spirits start with a ‘neutral’ alcohol base, to which flavourings (sometimes sweetening) are added (rules set out in categories 15-46 of Regulation 110/2008): 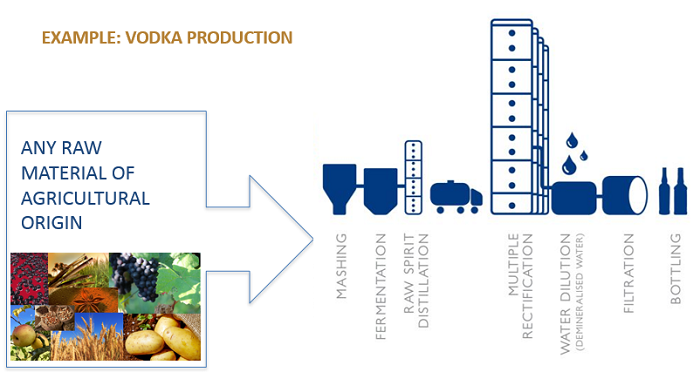 As a result, for ALL spirits, the distillation process transforms the raw materials to the extent that they are no longer present in the final spirit drink. This was demonstrated conclusively when EFSA agreed that allergenic protein from raw materials was not present in spirit drinks.

To conclude, distilling is an art which requires mastering many different factors: the selection of grains or fruits, the water used, the yeast, the climate in which the drink is produced, the shape of the pot still, the selection of the barrel, the time spent in the barrel (for those products which are matured), the blend recipe of the Master Distiller – all of these define the specific style and ultimate flavour of your favorite spirit drinks!

The distillation method has not changed since the birth of Cognac, using the same special Charentais copper still.