Priority markets for the spirits sector 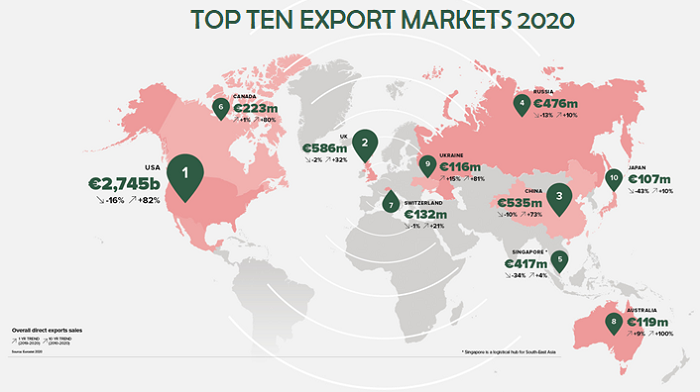 According to Brexit analysts in Brussels, intense discussions can be expected, particularly on those fundamental issues where major differences persist:  what type of agreement will eventually be concluded? Can a common interpretation be found on the “level playing field” provision – essential to maintain fair competition?  On the role of the ECJ in dispute settlements? On Northern Ireland? And all the other open points?

Europe’s spirits sector has benefitted hugely from the creation of the EU’s Internal Market, and from the range of bilateral and multilateral trade deals, the EU has concluded with countries around the world. As a product that has been widely traded and exported for centuries, spirits depend on the free movement of goods. Within the EU, distillers have benefitted greatly from the free movement of people and capital: spirits worth €2.7 billion are shipped each year between the EU27 and the UK.

Keeping these trading flows uninterrupted and maintaining a close relationship between the EU and the UK  are therefore of critical importance for our sector. In particular, we welcome the Protocol which ensures continued tariff-free movements of goods between Ireland and Northern Ireland. This also protects important cross-border supply chains for the production of spirits such as Irish Cream. Like many other industries, we need a living agreement between the EU and UK to preserve fair competition and maintain consumer confidence in our products.

Clear here to see our specific expectations on what an ambitious agreement should be made of.

TTIP negotiations started in 2013 under the Obama Presidency. TTIP would help to reduce costs arising from obstacles and promote overseas protection of EU spirits geographical indications (GIs). In 2014, we shared our position paper with the European Commission. However, President Trump has not made the treaty a priority and negotiations were halted in 2016.

In the meantime, the spirits sector has found itself embroiled in an admittedly complex, yet totally unrelated, trade dispute between the EU and the US. The consequences for distillers on both sides of the Atlantic have been severe.

The EU’s 25% tariff on US Bourbon whiskey (imposed in Summer 2018) has caused exports to drop by a staggering 33% within the past two years, causing losses of well over US$300 million. Similarly, the imposition of a 25% US tariff on certain European spirit drinks (see list above) since October 2019 is exerting a heavy impact on the affected distilleries across Europe.

As our sector struggles with the devastating economic consequences of the COVID crisis – and the temporary closure of bars, restaurants and travel retail stores that came with it – we can no longer afford to carry a disproportionate economic burden in a trade dispute that is meant to be about steel, aluminium and civil aircraft in the first place.

What we need policymakers to do is to focus on the core issues, find a negotiated solution, return to zero tariffs and thus help boost the recovery. Unfortunately, this seems not to be the direction in which we’re heading. The decision by the World Trade Organisation (WTO) in the Boeing case is expected for September 2020. It will likely recognize – as was the case for Airbus last year – the existence of illegal subsidies. This step risks triggering yet another round of retaliatory action between the EU and the US – which would be the 4th since 2018. And spirits could, once again, be part of the equation.

In addition, the US administration announced the upcoming deployment of the so-called “carousel retaliation” whereby the US can periodically review and shift tariffs on different groups of goods. As part of this process, the US is considering imposing new tariffs on gin and vodka from the UK, Germany, France and Spain as of 12 August.

Canada is an important market for EU spirits but remains a challenging environment.  CETA was ratified by the European Parliament on 15 February and pending the 30+ national ratifications, provisionally entered into force on 21 September 2017.  The first meeting of the Committee on wine and spirits took place in July 2018 (report here) highlighting the remaining issues of concern.

China is for long one of our top export market. The development of this market continues to offer high opportunities for EU spirits but challenges remain. So far, we have witnessed a number of positive moves from the Chinese authorities. In November 2017, China decided to cut import tariffs on nearly 200 types of consumer goods in a bid to encourage domestic consumption. Both brandies and whiskies were covered by the decision, with an import tariff that shifted from 10% to 5%. In March, China announced to reduce VAT rates from 16% to 13% – a reduction that will equally apply to domestic and imported goods from today 1 April 2019. We had also welcomed the serious commitment by the General Administration of Customs to lift low-risk certificates for exporters.

A major step was taken on 20 July 2020,  with the signature by the Council of the agreement between the European Union and the government of the People's Republic of China on geographical indications (GIs). This is the first significant bilateral trade agreement signed between the EU and China. It will ensure that 100 EU agri-food GIs ("Geographical Indications") such as Cognac, Polska Wódka, Irish Whiskey get protection on the Chinese market. Likewise, 100 Chinese products will be protected in the EU, thereby ensuring mutual respect for the best of both agricultural traditions. Four years after its entry into force, the scope of the agreement will expand to cover an additional 175 GI names from both sides. The agreement also includes a mechanism to add more geographical indications thereafter.

Despite a steady decline since 2013, MERCOSUR countries receive significant exports, with Brazil taking the biggest share. The size of these markets and the growing demand for quality European products require an ambitious trade agreement to solve a range of longstanding market access issues.

The deal must deliver a significant level of market access by removing the tariffs applied to spirits from entry into force, thus permitting our products to compete on a level playing field.  We understand that offers from MERCOSUR partners liberalise market access for most spirits in 15 years thereby introducing a difference between categories. This is not acceptable, especially when the tariff offer from the EU is on a phase-out of 10 years maximum.

A second point that is crucial for us but also for many other agri-food producers across Europe is the protection of GIs. It is probably the first time the EU faces with such a large number of GIs issues to be solved, be they from Ireland, France, Portugal, Italy, Spain etc. Conflicting names, genericity, anteriority of brand protection, etc. are at stake but we count on DG AGRI and DG TRADE not to sign any agreement that would not find a suitable solution for most of them! The EU – and increasingly other countries in the world like Japan and China - have understood the social and economic importance of GIs (driving for instance 2/3 of our spirits exports) and we should not compromise on this point.

Thirdly, the EU should also be ambitious in making sure that existing tax discrimination cannot remain at the risk of making market access meaningless for European exporters & investors.

On 28 June 2019, the EU and Mercosur states reached a political agreement for an ambitious, balanced and comprehensive trade agreement. Two years after, spiritsEUROPE and 12 EU associations call for the swift ratification of the process. Click here for the full statement.

India remains a complex environment for trade due to significant import tariffs and its composition of 29 states with independent regulatory powers on alcoholic beverages.  Despite a 210% increase in EU spirits exports over the last decade, only 1% of consumption in India is of imported spirits.  An offensive EU trade strategy towards India is essential for further growth and development into this huge untapped market.

The EU-Vietnam trade agreement was signed in December 2015 and included the elimination of the 48% import tariff after a period of 7 years. Vietnam is a high growth market for European spirits, with a huge increase in exports over the last decade.  Nonetheless, the full potential of the market, fuelled by the country’s sustained economic growth and dynamic demographics, has yet to be unleashed. On 17 October 2018, The European Commission adopted the Agreement which was sent to the Council and European Parliament.

The European Parliament subsequently gave its consent to #EVFTA on 12 February 2020, followed by the Council on 30 March and ratification by Vietnamese National Assembly on 8 June 2020.

As of the entry into force of the agreement on 1 August 2020, we will enjoy:

We welcome the EU Commission’s renewed strategic approach to Africa (...)

We thank the Council and European Parliament for having ratified the EVFTA...
STAY CONNECTED: Keep up-to-date with spiritsEUROPE’s activities via our Twitter & Newsletter